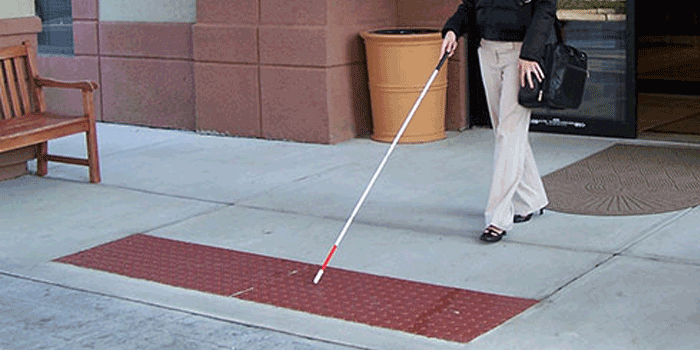 For many years, sidewalk design has been rethought and redesigned to ensure that it extends maximum benefits to the visually impaired. The first pronounced change was the introduction of curb cuts which helped eliminate tripping hazards. However, the removal of high curbs also eliminated the warning clue to the visually disabled whenever they were straying into the roadway.

There were various attempts made to try and replace the curb to ensure that the visually impaired notices when they are entering the roadway. The installation of truncated domes, a detectable warning surface, was one of the most beneficial replacements. These domes have a surface which is raised 0.2 inches above the ground, and they are easily recognized when tapped with a walking stick.  The visually impaired also benefit from the color contrast of the truncated dome surface in comparison to the surrounding area.

The American with Disabilities Act (ADA), set out some guidelines whereby a color contrast of 70 percent was recommended. This way, people with limited vision will easily notice the warning area. In most jurisdictions, federal yellow is the most preferred color, but there are those who prefer brick red. In case the surrounding surface is light in color, black or gray surfaces are recommended.

The anti-slip surface on the truncated domes benefits everyone using the sidewalk, especially during rainy seasons when the possibility of slipping is high. There are tactile strips which are made from engineered composite elements to ensure a slip-resistant surface. An example is the Access tile, which has a unique diamond grip design on its surface thus making it slip-resistant. Notably, each Access tile has twice as many tactile elements as other comparable tiles making it the best tile to use on the sidewalk. Another effective feature of the replaceable tactile system is the fact that they are easily replaceable in the event of damage due to extreme use. This feature allows the city work department to curb potential slipping hazards, which greatly benefit the visually impaired.

Finally, the material used to make truncated domes plays a very significant role in protecting people from slipping hazards. At first, concrete might seem to be a good material for making these domes, but the inability to mold it perfectly makes it ineffective. Concrete domes are also prone to breakages making the surface uneven and raising the possibility of slipping. Also, rubber domes pose the same problem which is why engineered composite elements are highly recommended to ensure maximum benefits

Evidently, the sidewalks should have a detectable warning surface to ensure that people who are visually impaired do not stray into the roadway. These warning surfaces should be easily noticeable, but on the other hand, they should not be exaggerated to avoid creating problems that affect pedestrians.